Critique of Pure Unreason: In Which Politics Intrudes and a Reviewer Reveals More of Himself Than of His Subject 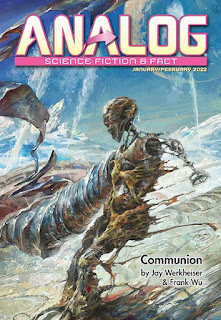 Don't let us fool you: All writers are egotists. So obviously yes, I do read my reviews. It's a mistake, but I can't look away. And every now and then I'll find a review that hits some soft spot in the story and I'll think Wow, I should have caught that.

Then there are the other negative reviews, the ones so apparently out of left field that I get an out-of-story experience...the creeping suspicion that the critic has confused my piece with another one. But no, he's block-quoted my text as a shameful example to other writers. And I go hmmm. I wonder what's going on.

Most recently, someone did that with Charioteer, my short story in the Jan/Feb 2022 issue of Analog. They thought the central conflict was clichéd. I was baffled. Charioteer is a story of surviving a deep-space disaster, of a hero against the elements. If that's cliché, then so are Gravity, Marooned, Tau Zero - hell, so is To Build A Fire.

I read the review again, and suddenly I realized that the critic wasn't talking about the central conflict, despite his choice of terms. He was talking about the backstory...and things became a little clearer.

The backstory is the reason why my hero is stuck out there in Mercury space. She's a political prisoner, racing a lightsail for the amusement of the dictator she once dared to oppose. The backstory is also the reason she's in trouble: Someone has sabotaged her ship. The backstory includes the tactics that were used to railroad her into prison and to get her ship sabotaged...

...and each of them, from stochastic terrorism to Orwellian falsehood, is a tactic that's been used here in America in the last five years. Ripped from the headlines, as it were. I checked the reviewer's bio. It was easy to guess the reviewer's presidential picks in 2016 and 2020.

Amazing how fast something can become tired and cliché...when you don't want to look too closely at it.