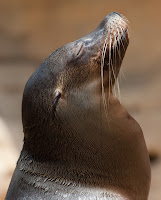 So psychologists used to think that only animals that could vocalize like humans - us, parrots, and a couple of other bird mimics - could keep a beat.

But it turns out that a bunch of California marine zoologists have trained a sea lion named Ronan to bop to the beat.

The only problem? She really seems to groove to disco.