Sam's wagon was to the far rear of the procession.
Joe has incurred our deepest wrath.
Near silence reigned.
Many hundreds of years.

Make a strong statement and stick to it, my fellow writers. Don't qualify it unless you have to, that's my advice. You'll only weaken yourself...or should I say, you'll weaken yourself severely, and your efforts will be very laughable.
Posted by Ted at 7:29 PM No comments:

Who Loves Ya, Babe?

Because I want nothing but the best, most accurate prose for you, my faithful readers, I took a sword fighting class on Tuesday. Broadsword, specifically (although we practiced with katanas). I learned about true edge (the one opposite your supporting thumb) about upper and lower lines, and about not going to the hospital. Cool!

There's something deeply satisfying about holding a weapon - and I say this is a committed gun-control proponent. Also the instructor was really cute - she had this Callie Thorne thing going on. But the next day, my ankles - hoo, boy! Yikes. That's why middle-aged men are generals, not swordsmen.

-Did Orwell really write in a suit, tie, and cigarette?
Times have changed.
Posted by Ted at 4:46 PM 2 comments: 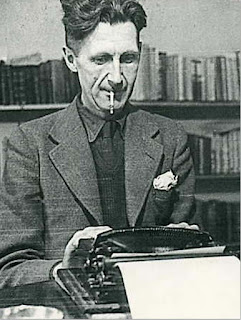 But many people don't realize that Orwell (or Eric Arthur Blair, his real name) was an even better essayist and journalist than he was a creator of fiction. He had the ability - born of native talent and long, careful effort - to convey the most complex and nuanced ideas in simple, powerful language.

You want to improve your writing? You want to wring all the mush, stale clichés and tired description out of your prose? Then read Orwell's essay Politics and the English Language. Go ahead. Do it now - you can thank me later.
Posted by Ted at 6:07 PM No comments:

Check it out. It's a nice blog by a fellow Musa writer.
Posted by Ted at 12:37 AM No comments:

I'm so sick of writers whose highest aspiration is to be the next friggin' Robert Jordan. Here's the deal:


1. There are three, and only three, fantasies in which the presence of maps in the book does not presage pre-chewed suckitude: Oz, LOTR and Earthsea.

2. Conlangs are a parlor game for linguists, not a substitute for good writing. 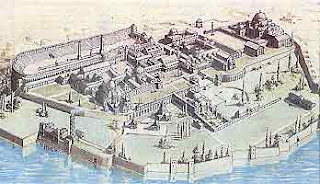 One of my best friends, Lon Casler Bixby - aka Neoichi - is one of the featured photographers on the Art Takes Times Square billboard event TONIGHT.

But before Halo, anime and manga, there were these folks:

Although Heinlein's novel came first (he has so many firsts!) and has one of the most exciting descriptions of future warfare ever in the first chapter, Haldeman's novel is more realistic, grimmer, and in general (I think) a better effort. As a side note - Heinlein served five years active duty in the Navy, but tuberculosis invalided him out in 1934. Haldeman was a draftee who served as a combat engineer in Vietnam, where he was wounded. You can see their backgrounds in the books: Heinlein, the man who wanted to serve, pre WW2, but ultimately didn't experience combat; and Haldeman, the man who didn't want to be there in Vietnam but did experience combat, whether he wanted to or not.

No, it's not some kinky thing with masks and leather. (That's under my *other* pen name - Anne Rice.) But there's an abiding notion that science fiction - "hard" science fiction, anyway - must be more logical, better extrapolated, than any kind of loosey-goosey fantasy. I don't think that's the case. I think there's been some very rigorous, logical fantasy...but the rigor often takes place in terms of metaphors, instead of the effects of science or technology.

Tim Powers is the writer who comes to mind first. His fantasy is always tinged with horror, but no one can deny just how well he's worked out the mechanisms of his supernatural forces - whether it's voodoo, succubi, or tarot.
Greg Keyes, with his Age of Unreason series, did the same with alchemy.
Then there's James Blaylock, with All the Bells on Earth.

A thoroughly worked out fantasy gives the reader the feeling of wheels in motion in the background, some bigger plan of which the characters are only a part. I can only aspire...

Mike my agent tells me creative nonfiction is the way to go these days. So I'm playing around with some ideas, but I'm not sure they'll sell.


6. Screw You, Jack: The Wit and Wisdom of Ayn Rand
5. Entitled!: How Talking to Poor People Can Teach You Spiritual Truth and Great Sex
4.  The Nine Intercalations
3. Corporations Are People Too!
2. The World's Greatest Lover: My Days and Nights With the World's Top Models (Wait - that belongs in the fiction category. Sorry. As you were.)
1. The Power of Soon - if you don't want to work too hard for your enlightenment. I think that one's a keeper. 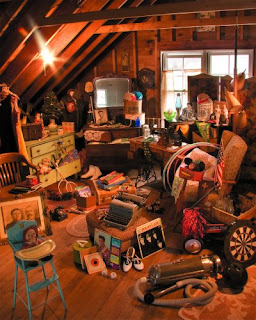 Any blogger will tell you that there's a qualitative difference. NOTHING is the vast, ultimate, universal vacuum, home only to a foam of virtual quanta and the occasional cosmic ray. Nothin' is a lot smaller. Homier. Sort of like when you were a kid, and you were up in the attic messing around with your brother's old camera equipment or hiking gear, and your mom asked you what you were doing, and you said nothin'.

It's more temporary. And productive. Think of it as a brief incubation period, where you're goofing off.  Daydreaming, looking around at all the cool stuff. Who knows what you'll find?
Posted by Ted at 9:29 PM No comments:

Heinlein On My Mind

I know, I've been citing him a lot this week.
But heck, he also invented the Roomba. (Check out The Door Into Summer.)
Posted by Ted at 8:10 PM No comments:

"There's a mutie! Look out!"
At the shouted warning, Hugh Hoyland ducked, with nothing to spare. An egg-sized iron missile clanged against the bulkhead just above his scalp, with force that promised a fractured skull. The speed with which he crouched had lifted his feet from the floor plates. Before his body could settle slowly to the deck, he planted his feet against the bulkhead behind him and shoved. He went shooting down the passageway in a long, flat dive, his knife drawn and ready.


These are the first 85 words - only 85! - of Robert Heinlein's novel, Orphans of the Sky. They are a classic example of what science fictions pros call "incluing." Incluing is the inclusion of telling details in the action of an SF story, details that gradually set up the author's new world. Let's take a look at what Heinlein did. 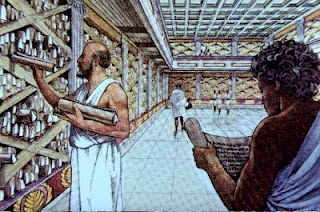 You know one of the most important ways for libraries to decide what books to acquire? Patron requests.

You - yes, you! - now have a chance to change your world for the better. The next time you're at your local repository of timeless wisdom, request your favorite e-book of all time...The Wrong Sword!

Another Example of "Magic as Metaphor" 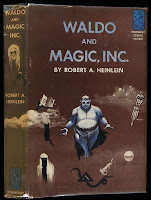 One of Robert Heinlein's lesser-known stories, Magic, Inc: Magic as Main Street business operations. (In fact, you could make a good case for this being the earliest "contemporary fantasy" story. Once again, RAH gets there first...)

I believe - along with folks like Scot McCloud and Neil Gaiman - that webcomics are where it's truly at in terms of TNBT - The Next Big Thing. Not just as an incubator for talent that will then migrate on to Marvel or DC or Vertigo, but as a form in itself. Artists like Kate Beaton, Egypt Urnash...and a personal favorite, Evan Dahm.

Check out Evan especially. He is just...unique.
Posted by Ted at 10:52 AM No comments:

Tricks of the Trade - Magical Thinking

If you want to make magic seem real, try making it seem other.

When it comes to creating a universe, magic is a pain. It suffers from a reality gap that doesn't afflict geography, economics, or any of the other world-building disciplines. If your alternate world cries out for verisimilitude in politics, weather patterns, or zoology, you can fall back on thousands of real-world examples; not so in magic.