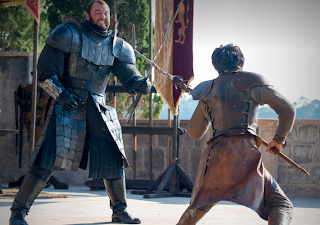 So...as soon as I saw Oberyn do his fancy spins and flips before the trial by combat, I knew he would die. It's to the the show's credit that I actually suspended disbelief for a few moments during the fight, and entertained the notion that he might live. But alas, no.

Here's the thing - I've heard a lot of people complain that they knew Oberyn was going to die because virtue never triumphs on Game of Thrones. The good always die young: Ned Stark, Rob Stark, Catelyn Stark, etc. But they're missing the point, of course. The bad die, too - Joffrey, Viserys - and the good survive (for a while anyway): Tyrion, Jon Snow, Sam Tarley.

The point isn't that the innocent die, or that evil triumphs: The point is that living or dying has nothing to do with good or evil. Instead, it depends entirely on whether or not you're paying attention. Oberyn took his eye off the ball, so no amount of training in the fighting pits of Dorne was going to save him. Joffrey is more interested in sadism than power. He thinks he's invulnerable. He's wrong. Ned Stark is more interested in justice than power. He dies. Rob Stark is more interested in honor and love than power. He dies. Jaime Lannister only cares about himself. He does okay, until he starts to care about Brienne. Then he loses a hand. You'd think he's learned his lesson...but probably not. Tywin Lannister is really interested in power...but he can't let go of those delusions, like "Tyrion killed my wife" or "Jaime is fit to lead." He's alive for now - but you just know those delusions will come back to bite him in the ass. A truly smart clan leader would never both abuse an underling (Tyrion) and give him power, and then indulge the spite of one of his other children.

The characters with a single-minded purpose get farther than the ones who are distracted by fancy notions. Which should mean that the Hound lives forever. But maybe not.
Posted by Ted at 1:20 AM