Armor Is Not That Heavy! 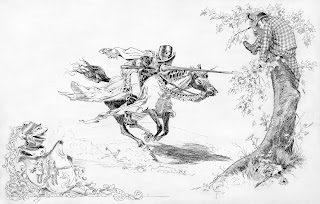 So, mea culpa. In The Wrong Sword, I made some (frankly almost inevitable) jokes about the weight of medieval armor. This is something of a grand tradition in medieval stories, starting at least as early as Mark Twain's Connecticut Yankee in King Arthur's Court, where cranes were imagined to hoist knights onto their horses.

Now, I never went that far, but I did describe things like the armor stopping just a moment after the wearer does, and our stalwart (but underweight and undertall) protagonist toppling under the weight of full jousting armor.

Seems I was overstating things a wee bit. Not to say that armor is light as a feather, but this great post on the Medievalist blog shows us what an athletic wearer can do in Late Medieval plate armor. Enjoy!
Posted by Ted at 1:41 PM