The Discovery Channel traveled a little farther down PT Barnum's "egress" by airing a fake mermaid documentary. Personally, I don't get the appeal of mermaids - for anything romantic beside posing on a rock, mermaids seem spectacularly ill-suited. Ahem.

And yet "mermaids" have been a flourishing industry for centuries:

1. The manatee. You'd have to be at sea a long time to confuse this


but apparently sailors used to do it. Imaginative peg-legged bastards.

2. "Fiji mermaids" - that is, hoaxes. PT Barnum popularized the most famous, a piece of creative taxidermy that combined the head and torso of a monkey with the tail of a fish preserved in papier maché. No picture - the thing would give you nightmares.

3. Sirenomelia. I won't show you a picture of this one either. It's pretty sad: Sirenomelia is a birth defect in which a baby is born with legs that are fused together. The infants usually don't survive. But during the Renaissance and Baroque eras, the corpses were often preserved and exhibited in mini-museums called "cabinets of curiousities" - wunderkammer.

Considering that manatees are endangered, there isn't a single "real world" mermaid that isn't tinged with sorrow. Let's finish up the list with mermaids that are unashamedly fake. They're a lot more fun.

4. Weeki Wachi Springs - I love this one. The goof factor is off the charts. 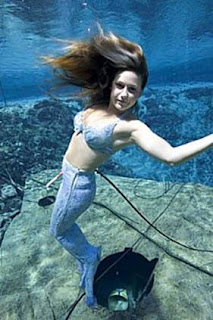 5. And, finally, that folk festival in my hometown, The Coney Island Mermaid Parade. This, my friends, is what mermaids are all about. 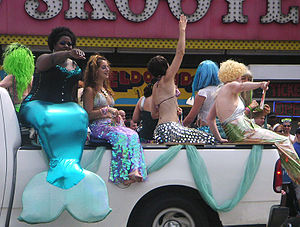