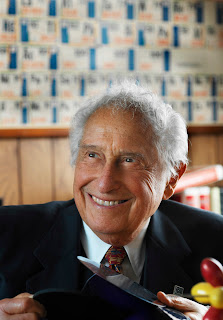 Stan Ovshinsky passed away today. His bio sounds like that of a late 20th Century Tesla.

He never went to college. He worked as a machinist, and got his first patent at the age of 24.

His company was called Energy Conversion Devices, and he achieved breakthroughs in the technologies we'll need to break free of fossil fuels: Solar cells. Hydrogen fuel cells. Semiconductors. He invented the amorphous semiconductor technology that allowed the creation of rewritable CDs and DVDs. He invented the rechargeable nickel-hydride battery technology in cordless drills and the Toyota Prius.

He also burned through millions of dollars of his own and investors' money. American industrialists didn't take him seriously until the Japanese took an interest in the '80s.

“I don’t relish the role of being a prophet in the wilderness," he said. "But I recognize that we’re agents of change and change is difficult.”
Posted by Ted at 8:54 PM