Why Is That So Good?

Every now and then there's a passage that just works. It makes you grin, or raises the hairs on the back of your neck. Some of them are so good that they enter into fan history. (That's not just true of speculative fiction, by the way; ask any English lit enthusiast about the "Disgusting English Candy Drill" in Thomas Pynchon's Gravity's Rainbow.) 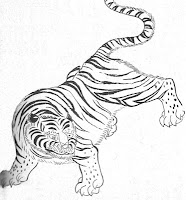 I thought it might be fun to take a look at some of the goodies in science fiction and fantasy, starting with the "White Tiger" scene from Barry Hughart's Eight Skilled Gentlemen. Master Li, an ancient, cunning, and somewhat alcoholic Chinese Sherlock Holmes, is administering a faith healing to the Weasel, a local ne'er-do-well who is dying of the plague. Li knows that the Weasel is going to die, and the ceremony is really for the benefit of the Weasel's wife, but Li's invocation (possibly inspired by a genuine Chinese ceremony - it feels authentic) still sends chills down the spine:

Then Master Li shook himself like a dog shedding water, and added, "Hell, I'm probably imagining things. Let's do what we can."

That meant cutting a tiger shape from a piece of paper and writing on it, "The Unicorn Is Here!" This invokes the auspicious star that neutralizes baneful influences, and I cut the sick man's arm to draw enough blood to stain the tiger red. The Weasel's wife had brought the other things, and the two of us knelt in prayer while Master Li spread his arms above the patient.

"Weasel, having fallen ill on a jen-hsu day you have collided in the north with the Divine Killer with Hair Unbound Who Flies in the Heavens," the old man intoned as a priestly chant. "In the south you have encountered the Vermilion Bird, and in the east you have met the Five Specters, but it is in the west where danger lies, for there you have angered the Tiger who is the End of Autumn, the Edge of Metal, the White of Mourning, and the End of the Great Mystery."

Master Li spread water and incense around and lifted his eyes and arms to the west.

Master Li signaled for the wife to rise and make offerings of food, wine, and money after touching each item to the bloodstained paper tiger.

"O Tiger, eat of the Weasel's food, and take away with his food the Divine Killer of Ascents and Descents and the Beginning and Ending of All Roads! O Tiger, drink of the Weasel's wine, and take away with his wine the Large Dead King and the Small Dead King Who Pull Out the Intestines and Drain the Stomach! O Tiger, take away the Weasel's money as you take away the Divine Killer One Meets as One Moves the Bed and Replaces the Matting, and the Killer Who Drives In Stakes and Puts Up Enclosures! O Tiger, Great White Tiger, eat of the blood upon this talisman of your sacred image, for it is the blood of your offending servant, and if your anger still demands his death, we offer his body in sacrifice."

Master Li pulled straw from the patient's pallet and swiftly twisted it into a man-shaped doll. He touched the doll all over with the bloodstained tiger image.

"You that are nothing but a body of straw have been touched by White Tiger Great-Killer-Thunder, and lo! you have become the body of the Weasel," Master Li chanted.

He signaled, and the Weasel's young wife connected twelve red threads to the straw doll and touched the other ends to her husband's body, and Master Li made hieratic passes as he coaxed the last sickness demons to cross the bridges of the threads from the Weasel into the doll. Then Master Li removed the threads, symbolically cutting each one. He passed the doll three times over the Weasel's stomach and four times over his back, and finally he raised the doll on high and plunged his knife through it.

"Behold, Ye Who Are the Beginning of all Endings and the Ending of all Beginnings, he who has offended you is dead! Great White Tiger, Lord of the Universe, your triumph is now complete!" the sage cried.

The Weasel had been in delirium throughout all this, but the mind is a strange creature. Somehow something got through, and he calmed and breathed much easier, and his fever had almost vanished when we left. Nonetheless, Master Li immediately proceeded to the neighbors to make sure help was ready and waiting when the worst happened. He has great respect for faith healing, but there are limits.

For students of anthropology and psychology, this scene is an example of sympathetic magic straight out of The Golden Bough. The Law of Similarity turns the straw doll into the body of the sick man; the paper cutout is the stand-in for the White Tiger; the threads help establish the Law of Contagion.

For writers, it's just terrific prose. The chills start with the phrase "The Tiger who is the End of Autumn, the Edge of Metal, the White of Mourning, and the End of the Great Mystery." They continue through the descriptions of the Tiger's domains: "...the Talismans of Sickness and the Ruin of the Year, the Gate of Mourning and the Funeral Guests and the Spirits of the Dead..."

In the entire description of the White Tiger - whom Westerners would probably call the Angel of Death - there are virtually NO adjectives. The tiger is never "deadly" or "vicious" or "terrifying." All of the descriptions are either noun-based ("of the Celestial Departments and the Terrestrial Forests") or verb-based ("O Tiger who lurks behind the stove and in the hall...") This makes the description profoundly concrete.

Parallelism does a lot of work, too:

Any speechwriter will tell you that repeating phrase structure will give punch to your message.

Then there's the specificity of the images. The "divine killer one meets when one moves the bed and replaces the matting" was obviously written by someone who had seen dangerous vermin in bedding. (I have a couple of friends from New Mexico who shouted "scorpions!" as soon as they read it.) The "Celestial departments and the Terrestrial forests" tells you that the Tiger goes everywhere, is a part of the order of things, and not even heavenly beings are safe from it.

And finally, there's the implication the White Tiger isn't just Death, but is the King of Death who controls other Deaths - the Killer Who Drives In Stakes and Puts Up Enclosures; the Divine Killer of Ascents and Descents; etc.

Add up those four techniques, and you've got an invocation any fantasy writer would be proud of.

Next Up: Robert Heinlein's straight-up Missouri apologia for religious tolerance.
Posted by Ted at 10:30 PM