Why's That So Good?: Vernor Vinge 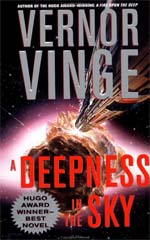 In a blog post I wrote for the gracious and prolific Samantha Combs, I pontificated that the essential fact of science fiction wasn't technology or aliens - it was the effect that speculative possibilities had on the story's characters. The situation, in other words, wasn't as important as how the characters felt about the situation.

Vernor Vinge - one of the best hard science fiction writers in the last 40 years, and an unacknowledged father of cyberpunk - pulled off this trick twice, in one of SF's most classic tours de force: Not only did he convey a speculative situation's effect on his characters...he made those characters non-human.

In Vinge's A Deepness in the Sky, much of the story takes place on Arachna, an earth-like world with the bad luck to orbit a star that only burns for fifty years out of 250. In the 200-year "Darks" in between, the world grows colder, and colder, and colder...until the atmosphere itself freezes into snow and ice. Some plants and animals simply die out and leave their spores for the next generation; higher life forms, like the intelligent "Spider" race, make use of a form of natural suspended animation in frozen caves.

What makes this life cycle more than a plot device is the thought that Vinge put into the Spiders' attitude toward the Dark. They are just making the leap to a technological civilization and scientific ways of thinking.They regard the Dark with awe as the final, sacred Mystery - almost the way humans today might view Death. So when two of the main Spider characters use technology to stay awake into the Dark and actually walk on the surface of the planet, it isn't just a momentous use of engineering; it is an almost blasphemous moment, and the characters half-expect to see the mythical creatures of the Dark that they were told about as children.

Here are a few paragraphs in which Vinge sets out the nature of the Dark. Notice the tone of his narration - quiet, solemn, as though you are being told these facts by a Spider who understands science...but is only a generation removed from superstitious awe:


In the last years of a Waning Sun there are storms, often fierce ones. But these are not the steaming, explosive agony of the storms of a New Sun. The winds and blizzards of the coming Dark are more as though the world is someone mortally stabbed, flailing weakly as life's blood leaks out. For the warmth of the world is its lifeblood, and as that soaks into the Dark, the dying world is less and less able to protest.


There comes a time when a hundred stars can be seen in the same sky as the noonday sun. And then a thousand stars, and finally the sun gets no dimmer...and the Dark has truly arrived. The larger plants have long since died, the powder of their spores is hidden deep beneath the snows. The lower animals have passed the same way. Scum mottles the lee of snowbanks, and an occasional glow flows around exposed carcasses: the spirits of the dead, classical observers wrote; a last bacterial scavenging, scientists of later eras discovered.

Yet there are still living people on the surface. Some are the massacred, prevented by stronger tribes (or stronger nations) from entering deep sanctuary. Others are the victims of floods or earthquakes, whose ancestral deepnesses have been destroyed. In olden times, there was only one way to learn what the Dark might really be: stranded topside, you might attain tenuous immortality by writing what you saw and saving the story so securely that it survived the fires of the New Sun. And occasionally one of these topsiders survived more than a year or two into the Dark, either by extraordinary circumstance or by clever planning and the desire to see into the heart of the Dark. One philosopher survived so long that his last scrawl was taken for insanity or metaphor by those who found his words cut into stone above their deepness: "and the dry air is turning to frost."

"And the dry air is turning to frost." Raised the hairs on the back of my neck the first time I read it.
Posted by Ted at 10:32 PM