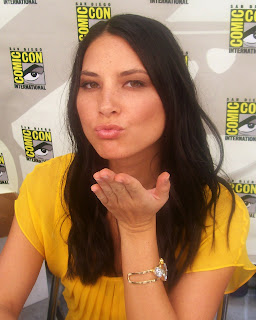 Maybe you've heard of the "Fake Geek Girl" meme. The idea is that (hot) girls can't be geeks, nerds, etc. Can't like comics, science fiction, fantasy, games. Maybe it's because Nerd-dom is supposed to be a Big Bang Theory, lonely-boys-only club; maybe it's pure misogyny. I'm not a fan of the meme - I like women, I like inclusion, I figure the more the merrier - but I can put a (slightly) more charitable spin on it.

Some of what powers the meme is the feeling among the moodier loners of Nerd-dom that the popular kids who humiliated them are now appropriating nerd culture for their own ends - and once bored with it, they will move on, like New Age Anglos at a Native American pow-wow. The Nerd Trope includes unpopularity, suffering, humiliation and social rejection, so the idea of neo-nerds who have never endured the dark side of the culture irritates those who have. The ONs (Original Nerds) feel used.

But with that in mind, I think we can strip the FGG meme of one of the "G"s. After all, there are Fake Geek Boys, too. Go to any Comic-con and you will see packs of pony-tailed indieprods looking for the next Hellboy they can monetize.

So let's do this - let's measure authenticity by the passion and love people have for the subject. Let's measure stature by the wit, originality and invention they bring to it. Let's measure gravitas by the rigor of their ideas. And then let's all get drunk.
Posted by Ted at 2:32 PM