Defiance - the Reviews Are in, and-

-sadly, unless things get better, this is another damp squib. It's also confirmation of the truism that special effects and money don't guarantee interesting science fiction. 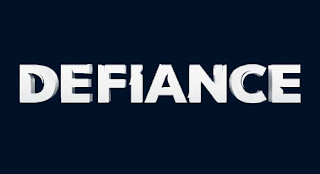 The show looks good enough. The battered St. Louis Arch dominating the sky is an apt visual symbol for a post-apocalyptic Earth (not quite as good as a half-buried Statue of Liberty, but then, what is?); the sets have the ragged, refugee-chic look that a solid production budget can provide; there are plenty of alien species for that sprinkle of exoticism. Heck, they even invented new languages for the alien Votan races, and that worked for Game of Thrones and Star Trek. So why doesn't Defiance satisfy?

It isn't the premise - remaking westerns into science fiction is a TV tradition, and it can work just fine. (In addition to the much-lamented Firefly, for instance, Gene Roddenberry famously described the original Star Trek as "Wagon Train in space!" ) And with all the spaceship captains in the genre, it was about time for us to visit the "drifter becomes lawman and protects the town" trope.

Well, there are some  performance/direction issues. For instance, when the ex-military drifter Nolan meets Mayor Amanda for the first time, his lines and delivery sound like the "I'm playing with you because I'm so much stronger than you" lines we've heard from action-movie villains since forever...but of course, it's the Mayor who has money, power, and Nolan's weapons, and he's just trying to get some of that back. In short, it sounds like he's threatening, when actually he should be begging. When deputy constable Tommy disperses a mob of angry Castithans, he does it with a line that should be delivered behind a targeted shotgun, but is instead tossed out with a shrug. Then there's the town whore who actually loves her work, and is apparently happy to throw in the Girlfriend Experience for Nolan at no extra charge. If Defiance were a person, I would say it isn't yet in touch with its own emotions.

But the real problem is elsewhere. Fact is, Defiance is a classic case of Rubber Forehead Alien syndrome. The Votan races - Castithan, Irathient, Indigene, whatever - all have motives so easily comprehensible that they might as well be humans. In fact, they're human tropes: The Irathient are the series' Noble Savages, the Castithans are its Fallen Aristocracy, the Liberata are its Comic Servants... There's no shock here, no surprise, and no feeling of "the Other." It makes an interesting contrast to another TV series with which O'Bannon was involved two decades ago: Alien Nation. 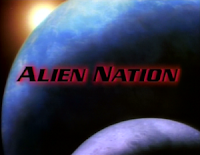 Alien Nation began as a movie with an inventive premise: What if the aliens do finally arrive on Earth - but instead of coming as conquerors or advanced beings, they are refugees, slaves, illegal immigrants? (This was years before the widely praised District Nine, which had pretty much the same premise, but took it in a much different direction.) The movie used the idea as the background for a fairly mundane cop-buddy-action story; but then it was made into a TV series, and things started to get interesting...because the writers for the show actually sat down and thought about "Visitor" society. They tried to make it work. The result was a society that was close enough to human to allow for some assimilation, but different enough to be weirdly different. Visitor society wasn't an exaggeration of some human character trait or historical culture (Klingon = Varangian Guard; Ferengi = Wagnerian Nibelung); it had the feeling of being its own unique thing. But that was the TV show. Its show runner was Kenneth Johnson (Six Million Dollar Man, V, The Hulk), not O'Bannon.

Of course, trying to accomplish the "Genuine Other" for SEVEN distinct alien races in a series would be a bit much. But it's the thing that would lift Defiance out of the weary rut of so many Syfy series. Too much to hope for, maybe.
Posted by Ted at 8:35 PM