That "Starks Are Dead" Thing? GRRM Has the Answer 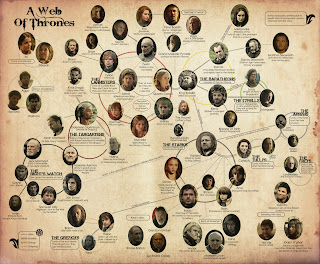 If you're writing a franchise in which any character, minor or major, can be killed at any time, then eventually you're going to run out of characters to kill. Now, if you've been thinking tactically, not strategically, that's the end of the story.

If you're like George R.R. Martin, however, you understand that to keep things going when you're merrily bumping off big characters left and right, you can't just work with the Majors. You have to have the farm leagues as well. That's why, although we start off with the Starks in Game of Thrones, we eventually encounter characters like Brienne of Tarth, Bronn son of no one in particular, Ser Davos, et al. Any one of these secondary characters can then become a major character...who can, of course, be killed off in turn. You just have to prepare by planting them far enough in advance, so you have a nice, deep bench of pre-corpses.

The corollary to this: Any character with a unique characteristic that clearly has a bearing on the world at large - oh, an ability to command dragons, for instance - is probably safe. That is, unless or until some other character acquires that characteristic.

So if somebody else in Westeros suddenly develops the ability to speak in Old Valyrian and withstand stone-melting fire, look out. Daenerys' days may be numbered.
Posted by Ted at 1:46 AM