To ask that question, and then answer it in a way that's both believable and interesting, you have to be both a good writer and a good...futurist? Epistemologist? Intellectual? Scientist? Sophist? Someone who likes to play with ideas, and understands that play involves rules - in this case, the rules of logic and probability. Finding someone who is both isn't easy. 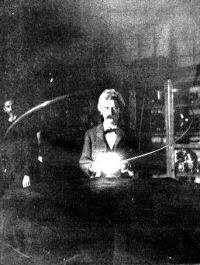 Conditions in the U.S. after World War I helped to promote the What If writer in a way that has never occurred before or since. America had an entrepreneurial culture that encouraged inventors and tinkerers. The Great War, the Jazz Age, and an influx of European refugees in the '30s helped to break down American insularity and exposed potential writers to different ways of life. Individual scientists and engineers (Edison, Tesla, Morse, Olds, Ford, Hollerith, Cooper Hewitt, Gillette, etc.)
could make significant advances and carry on important experiments without billion-dollar outlays.  It was easier to bridge CP Snow's "two cultures" - the sciences and the humanities. Finally, a writer could make a living (albeit not a tremendous one) on short-story sales alone - which made the pulp magazines superb incubators for story-telling talent. Those magazines also had writer/editors like John W. Campbell, who understood what the genre needed to flower.

A lot of those conditions have vanished or mutated. There aren't a lot of successful lone wolf engineers these days; team play is the norm in the sciences, and the mindset required for working on a subset of a subproject dictated by the long-range budget of a multinational corporation doesn't necessarily lend itself to serious lucid dreaming. You can't support yourself by writing short stories anymore (to say the least). While the Internet has opened up lines of communication where there weren't any before, it's also taken space that used to belong to the old-fashioned bull session; sitting in a room swapping ideas with other science junkies face to face has a productive aspect that a chatroom can't match. Finally, the fan society that has shaped and supported science fiction for so long has changed. It's less about science and more about SFX. "Media" cons that focus on comics, cosplay and video games are big money-making enterprises; gatherings that focus more on actual science are smaller and harder to find.

Given all this, it might be a little unfair to expect Syfy to recreate the socio-economic conditions of mid-century America. But there are things the executives *could* do, if they were motivated. Wouldn't take much time or money, either.

1. Develop a reading list for your executives. Every Syfy employee with story input should have a basic grounding in the genre. You don't have to read Einstein's Relativity, but you should know that there are important SF authors in addition to Heinlein, Clarke and Asimov. (Hell, I've even GOT a reading list for you, broken down by subject. But you'll have to contact me directly. And it'll cost you.)

2. Develop relationships with F/SF editors and magazines. They may not know much about TV production, but they know story. F/SF story. It's their job. Talk to the people at Tor.com, Fantasy & Science Fiction, Asimov's. Get to know them.

3. Spend some time with scientists. They're nice people. Trust me. You missed your shot with Neil DeGrasse Tyson and Bill Nye (they don't need you anymore) but how about Andre Geim, the guy who first synthesized graphene in the lab? He's a Nobel winner, and he's got a sick sense of humor. (Levitating frog, anyone?) Why is it that WWE is still on Syfy, but TED isn't?