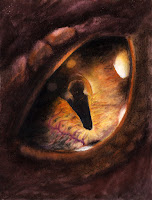 In case you hadn't already seen it, this is the video of Benedict Cumberbatch performing Smaug in the motion capture studio. I love these 4+ minutes far more than the movie itself. And to me, it encapsulates some of the things I like about Cumberbatch as an actor, and about many British actors in general (at least, the ones who make it over the pond in a significant way):

1. He doesn't hold back. It doesn't matter that he's playing a dragon, in a  fantasy, in a motion capture leotard - he gives it the same energy and
intensity he would give to Macbeth or to Willy Loman. How many American movie stars can you name who would do that? A few. Not many. Cumberbatch is not afraid to look ridiculous, to fail - and so, he doesn't.

2. He is clearly trying to imagine what his body would feel like as a dragon's body. He's physical. This is a motion-capture session, and he's giving them the motion to capture. Furthermore, his physical choices are obviously completely different from the ones he makes elsewhere. (Sherlock and Khan, compare and contrast.)

3. He is clearly enjoying himself, and he doesn't give a rat's arse about looking cool. 'nuff said.
Posted by Ted at 2:24 PM