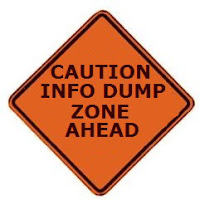 The info dump is the classic danger for any writer of speculative fiction. You've put so much thought and effort into creating a world unlike our own...how are you going to convey that world to your readers, so that they can understand your story? If you tell too little, maybe they'll be lost, and give up. But tell too much, and their eyes glaze over. All too often, the new writer dumps dozens of pages of exposition onto the reader before ever getting to the story itself, and is subsequently savaged by his or her writers group.

Needless to say, many of the Grand Masters of science fiction were also Grand Masters of exposition. They found dozens of sneaky, clever ways of getting the information into the story, and a few kludges too.

For instance, let's take a look at one of Asimov's most famous series, Foundation. The three books of the original series all depend on a single, overarching idea: That in the far future, mathematicians have systematized sociology, psychology, political science and economics into a discipline called "psychohistory." Psychohistory is so powerful that it can be used to predict the future of societies with accuracies into 90% and beyond. Of course, there are limits to what it can do, and laws that it must follow. The biggest law is that these predictions won't work if the subjects know about them; the next biggest law - and the one that is tricky for a writer - is that psychohistory doesn't apply to individuals, only to large groups of people...the larger, the better. And this is a big problem for a writer, because by definition, psychohistory is utterly removed from individual characters. And when all is said and done, fiction isn't about ideas; it's about individuals.

Imagine psychohistory in the hands of a novice writer. "How can I explain this idea to my readers?" he asks himself. "I know! I'll just explain it. I'll have the inventor of it give a lecture." Then would follow some dozen pages of exposition as the reader's eyes gently droop, and sag, and close...

But Asimov, instead of giving readers an info dump, embedded the information in conflict. Human, individual conflict. The first chapter in Foundation doesn't deal with Hari Seldon's discovery of psychohistory; it deals with the hostile reception Seldon and his fellow mathematicians receive when they make their predictions known.

Psychohistory has revealed that the Empire in which Seldon lives will collapse within five hundred years. Needless to say, the Imperial government doesn't like that prediction...and the actions it takes against Seldon and his responses to it are the story. Gaal Dornick, the math student who is joining Seldon's team, is shadowed and investigated by Imperial Security; he and Seldon are arrested; there is a "trial" by the Empire's Orwellian Committee for Public Safety; and finally Seldon arranges a compromise with the CPS, after which he reveals to Dornick that the punishment of exile the CPS forces on him has been his goal all along. Psychohistory is the background of the story, but the story itself is about the conflict. And it's brief, too...and from that moment on, the reader is grounded in psychohistory, and accepts it for the rest of the series.

The two scenes in which the reader learns the most about psychohistory are fraught with tension. The first is a job interview, in which Dornick proves himself to Seldon by working out mathematical functions that he doesn't realize at first apply to the Empire. The second is the trial by the CPS in which Seldon (and to a lesser extent Dornick) must explain psychohistory to defend themselves.