Here is how you make the pottage called menjoire: 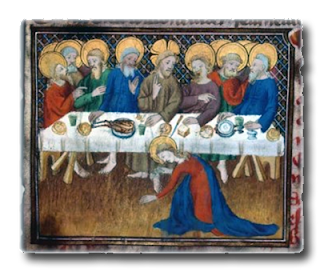 Firstly, the meat needed is young peacocks, pheasants or partridges, or if you can find none of these, plovers, cranes, larks or other small birds. Roast the meat on the spit and when it is nearly cooked, dismember them (especially the large birds such as young peacocks, pheasants or partridges), fry them in lard in an iron pan, and put them in the pot in which you wish to make your pottage...

To make the broth, take some white bread browned on the grill, soaked and sprinkled with the broth of a shin of beef, and strained through cheesecloth. You need cassia flowers, cinnamon, Mecca ginger, a bit of cloves, long pepper, grains of paradise and some Hippocras (depending on the quantity of pottage you wish to make). Steep the spices and Hippocras together, throw them into the pot with the meat and broth, and boil everything together. Add just a bit of vinegar, but do not let it boil for very long. Add sugar to taste. According to the fashions, put gilded wafers on the pottage when it is set out, or white or red anise, or pomegranate powder [seeds?].

If you wish to make it for a fish day, take whole unpeeled almonds, wash very well, crush and grind in a mortar, and strain through cheesecloth. If there is not enough liquid, take a bit of white bread, or bread crumbs from two or three white bread loaves; have a bit of clear puree [of peas] in which the peas have not burst too much, a bit of white or red wine, and a bit of verjuice; steep the almonds and bread; and strain everything through cheesecloth. You need the same spices mentioned above. Fry all the fish (to wit, perch, pickerel, crayfish tails and loach, the finest that you can find) in fresh or salted butter, and then de-salt it. Set out your fish on plates and put the broth on top. Add white or red anise, pomegranate [seeds], or some peeled almonds browned a bit in a little fresh butter on the fire.