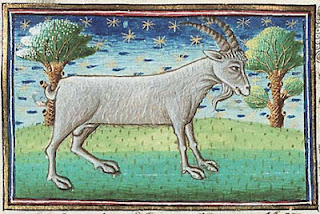 They didn't have any in the Middle Ages. Or at least it seems like that sometimes.

Heuristics are "experience-based techniques for problem solving, learning, and discovery," according to Wikipedia. They're methods to help you separate true from false, among other things. Of course, it's not fair for me to say that Medieval scholars had no way of telling true from false - after all, Occam's Razor, one of the most famous heuristics of all time, was first elucidated by William of Ockham, who lived in...wait for it...the Middle Ages.

But then take a look at this entry in a medieval bestiary: "The he-goat is a lascivious beast, known for its lusty nature. This nature makes the he-goat so hot that its blood can dissolve diamond, a stone neither fire nor iron can harm."

Bestiaries were the National Geographic of the Middle Ages, describing beasts both fabulous and mundane from around the world. The author might be forgiven for describing an immortal, fiery bird that lives in the deserts of Arabia - after all, he's not going to travel three thousand miles to confirm the existence of a phoenix. But a goat? That is not a fabulous creature. There were plenty of goats in medieval Europe. But the author of this bestiary couldn't be bothered to actually draw off a flask of ram's blood and see if it was hot or not. I mean, if he were correct, he could have kept the blood on his desk and used it as a hand-warmer for those cold winters.

Aristotle did the same thing, coming up with the most remarkable baloney about female anatomy. Women have fewer teeth than men, said "The Master of Those That Know"...despite being a married man himself.
Posted by Ted at 5:46 PM