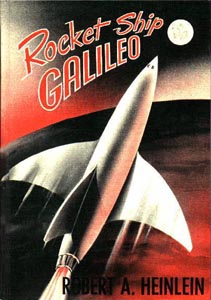 - by know you've probably figured out that I admire him as one of the great science fiction writers and an impressively competent man (holder of patents, predictor of the Roomba & breeder nuclear reactors, trained all-in fighter, influencer of the '60s counterculture, etc.) if not for some of his later political opinions.

So it pleases me to announce that there's a video clip of an interview with him on the only (?) movie he worked on, an adaptation of his own YA novel Rocketship Galileo. (And as an extra added bonus, visual SF greats Chesley Bonestell and George Pal are also there.)

And here it is!