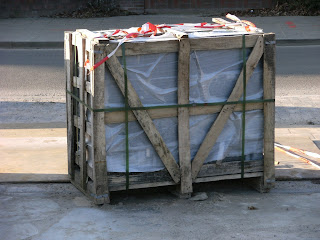 So Warehouse 13 just had its season finale. I didn't watch it - which isn't necessarily a comment on its quality. When a series develops long-form arcs over seasons, it makes the assumption (and takes the risk) that you'll stay current on the backstory. By Year 3 or 4, I've usually detached from the show. I'll miss an episode here or there, and before you know it, the series has rumbled by without me. It happened with The Sopranos, with Mad Men. And it's true even for shows I really, really like (as opposed to respect): I've barely remained current with Game of Thrones, and I think that's one of the best F/SF TV shows ever.

But Warehouse 13 is the current incarnation of a dead trope: the SECRET GOVERNMENT WAREHOUSE that has accumulated all the world's legendary/magical items. It's okay to use the notion as a background somethin'-somethin' - e.g. the final sequence of Raiders of the Lost Ark, where it's not only cool, but a sarcastic comment on the nature of government vs. individual heroism. Unfortunately, too many producers make it the central premise of their projects, or use it for additional cool points, and add nothing else. "Hey, look, it's Noah's Ark! Isn't that cool?" "Hey, look, it's Tesla's death ray! Isn't that cool?" "Gosh, I hope nobody finds out about this place, they could steal the Spear of Destiny and then we would all be in trouble!" Sigh.

The Librarian.
Area 51.
Warehouse 13.
Every fourth episode of The X-Files.