Frederick Pohl, one of science fiction's greats, has passed away. He was 94, and one of the genre's most influential fans as well as one of its great writers. He cofounded the Futurians, a New York SF fan society that had a big influence on the field during its "Golden Age" of the '30s and '40s. While with the Futurians, Pohl developed friendships with Isaac Asimov, Donald A. Wolheim and others who would be important editors and writers.

A Young Communist in the '30s because of the Communist stands on racism, unions, and Fascism, Pohl broke with the Communist Party when Stalin signed a peace pact with Hitler in 1939. He served in the army overseas from 1943 to 1945 as a weatherman. He was married five times and had four children. 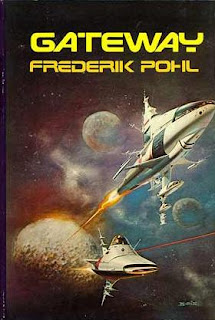 Pohl published one of the genre's first fanzines, Mind of Man, and was the editor of Astonishing Stories and Super Science Stories. He worked as a copywriter, a copy editor, and a literary agent - on of SF's first. When he wrote on his own, he was famous for novels like the Heechee Saga (one of SF's great "enigma tales") and Man Plus, and for his collaborations with Jack Williamson and CM Kornbluth. (The Kornbluth collaboration created some of SF's first great satirical works, like The Space Merchants and Gladiator-at-Law.)

He also worked as an acquiring editor for Bantam Books, which allowed him to bring forward works that would become classics, like Samuel R. Delany's Dahlgren. He won the National Book Award, the Hugo and the Nebula, and for a while was the Encyclopedia Britannica's official authority on the Roman Emperor Tiberius.