Also known these days as counterfactual history, an alternate history is a timeline in which events occurred...differently. Battles lost were won; fallen empires remained intact; great figures died before their time, or lived on past it; and we are given a tour of the consequences.

Some side notes after the jump.

This idea has grown so much that it's practically a sub genre of its own. Harry Turtledove is the acknowledged Alt.Hist specialist, but writers as diverse as Len Deighton and Newt Gingrich (yes, that Newt Gingrich) have tried their hands at it, with varying results. 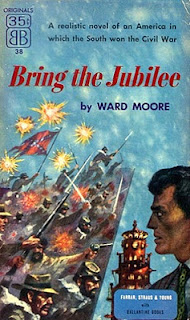 In the Paratime series, H. Beam Piper added the notion of time-lines to his alternate histories. An advanced Terran civilization on the "First Level" time-line develops the ability to travel to other time lines in which different histories play out. They colonize other sectors, exploiting them for crops, raw materials, vacation real estate...and cheap labor. (Piper, an amateur historian himself, had worked out five different general histories - with a multitude of variations - involving the collapse of civilizations and the migrations of prehistoric peoples.)
Posted by Ted at 9:44 PM