The idea of Mankind creating life - especially intelligent life - has been around forever, a subset of the Promethean Myth...we get too smart, we get too uppity, and disaster ensues...or not.

For SF purposes, "artificial intelligences" or "AIs" are artificially created beings, usually computers, that are self-aware; "robots" are AIs that can move themselves and other objects; and "androids" are robots built to look and sound like human beings. Cyborgs, on the other hand, are organic beings with cybernetic replacements, like The Six Million Dollar Man.

The Golem, traditional
Frankenstein, or The Modern Prometheus, Mary Shelley
R.U.R., Karl Capek (originated the term "robot" and the concept of the robot uprising) 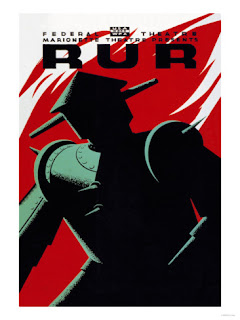