[SPOILER - ish.] So…the plots have tightened up. And the team member who betrays the others - well, we saw it coming, but it still made sense, and it had a nice "real world" ambiguity. The team's reactions to the traitor in their midst was also nicely low-key.

But the things that have bugged me since the beginning - the choice of team members, the lack of depth in their characters, the lack of intra-team interaction between characters like Ward, Fitz and Simmons - none of these have really been addressed.

Now let's do something really, really unfair: Let's compare Agents of S.H.I.E.L.D. to Buffy the Vampire Slayer. As in Buffy, you have a team of young pretties, accompanied by a middle-aged "mommy" and "daddy": May and Coulson in AoS, Giles and Joyce in BtVS. In AoS it's more about tech than magic; and the regulars are less likely to have special powers. There are a lot of other differences - Coulson's team has a much-more nuanced mission than Buffy and the Scoobies (hide the secrets vs. kill the evil); the contrast between the mundane and the horrible that formed such a huge part of BtVS isn't there; AoS is not a show about teen-agers growing up (what it IS about I'm not sure yet, and I suspect the Whedonites aren't either); and so on.

But there's a huge technical difference between the two, something overlooked that - considering how sharp Whedon usually is about these things - really surprised me. It's this:

The AoS regulars don't have real relationships with one another. BtVS started off with a double love triangle: Xander loved Buffy; Willow loved Xander; Buffy loved Angel; Angel couldn't love Buffy. Giles struggled to assert his authority over Buffy; Buffy rebelled. Buffy struggled to keep her second life secret from Joyce; Joyce used obliviousness to deal with a truth that was too much to handle. Each main character had a unique relationship with every other main character. Does AoS have anything remotely comparable?

Characters are defined by relationships; without constant relationships, the characters are flat at best. What kind of relationships do Fitz and Simmons have with the others? For that matter, what are they to each other? (And no looking at the online bios; that's cheating.) Besides teaching Skye, what kind of relationship does Ward have with her? Or what does May think of Fitz/Simmons? Big blanks to all of those questions. Maybe, after the last episode, you could sort of make a point about Skye looking for a home, and finding it in the heart of the organization that took her parents away…maybe. But that's a pretty late reveal, and nothing else has really dealt with character at all.

You all saw an ST:TOS "after"- 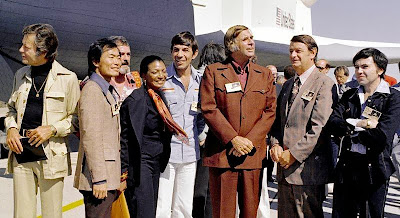 As before, these Star Trek photos courtesy of the Internet presence of the inimitable George Takei. In case you were wondering, the gent in the brown leisure suit is Gene Roddenberry his own self.
Posted by Ted at 11:14 AM No comments:

Well, y'all know I've been rather tepid about AoS. So far, Coulson is the only character I've found compelling, and I think they're already placing too much story burden on his thin, desk-bound shoulders. (I say "desk-bound" advisedly. Part of Coulson's charm has been that actor Clark Gregg projected this wonderful, nebbishy, bureaucratic aura that was the perfect foil to the grandiosity of Thor, Iron Man, Captain America and the rest. He was the very human onion in the superman stew. Now they're trying to give him a James Bond backstory - like his liaison with the hot Peruvian agent who betrays him - and it sits uneasily on him.)

Anyway, this week's episode- "Eye-Spy"- was pretty good. It was tight, well-plotted, with some clever twists. But...it didn't go any farther in making me want to know the other characters. Until/unless the show finds a way to make that happen, it will continue to sputter.

1. I have to be able to have faith that Coulson's motivations in recruiting this crew will become clear and make sense.

2. I will have to see something more interesting in the team than a handsome James Bond loner, a streetwise hacker grrrl, two lab geeks and a martial arts expert.

Are we going to get f*****g subtitles for Fitz and Simmons? Maybe they build a translator drone so that everyone else can understand them?
Posted by Ted at 2:07 PM No comments:

For All My Fellow ST:TOS Fans Out There-

Hope I look that good when I'm up there. If you're like me, you're smiling right now. 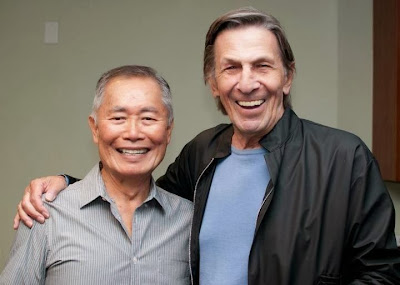 The Fans Have Turned

Remember how last week I was talking about Agents of S.H.I.E.L.D.? And remember I was saying that Marvel and Disney/ABC knew a lot about fan service? And that this was nice, but it wouldn't save them if they put out disappointing product?

Well, I guess I'm kind of a prophet.

If you check out the forums over at io9.com, the fans have turned against Agents of S.H.I.E.L.D. Google "agents of shield discussion"and the top entry after the "news" search is "4 Ways to Improve 'Agents of S.H.I.E.L.D.' - Screen Rant." If you sow the wind, you'll reap the whirlwind - so you better have a windmill handy, not a straw house.

PS - One of the scariest things (for the producers) is that the fans are talking casting. That means the writing or directing is flawed, but they can't quite figure that out, so they blame the actors.
Posted by Ted at 9:49 AM No comments:

So those of us who write fantasy know that magic is the defining element. (Maybe you can write fantasy without it, but it ain't easy.) Which means that establishing how magic works in your story is crucial.

Well, to show a terrific example of sympathetic magic in the real world, watch this clip from World Wrestling Entertainment.

So my buddy Lon is a pretty great photographer. If any of y'all are interested in his images, he's here at http://www.neoichi.com. And he's got merch here at http://society6.com/LonCaslerBixby. For those of you with books coming out this year, seriously take a look at his work. Can you say "cover art"? 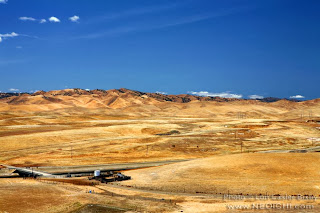 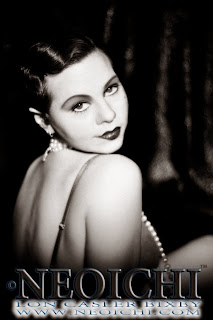 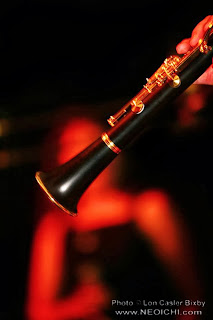 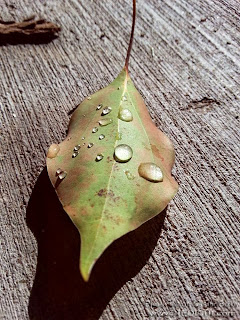 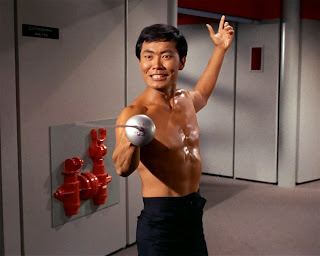 Embraced by the Cool

When it comes to Agents of S.H.I.E.L.D., ABC and Marvel clearly understand fan service. They know all the notes to hit, from appearances at Comic-Con to tweeting about Easter Eggs at the end of the credits. And thanks to Joss Whedon - both his career in general and the job he did on The Avengers - they have a huge - nay, heroic - amount of fan goodwill to play with. So, two things to think about:

1. ABC/Disney and Marvel have achieved full penetration of SF fan culture. I'm conflicted. Back in the 20th Century, fan culture was a ghetto. It was the ultimate, genuine counterculture - because it was considered "loser" culture by so many. That meant a lot of negatives, of course, but it did allow some positives to flourish: a defiance of conformity; an interest in the truly original, which is often less comfortable and attractive than what the mainstream thinks is original; a love of ideas, even when their presentation was clunky and awkward (think '70s sci fi movies...so much spandex!)

Today's fan culture is mainstream culture. It is fully engulfed, er, embraced by "cool kids," movie producers and corporate marketing executives. To some old-time fans, this is vindication: At last everyone else finally understands what we've known from the beginning! This stuff is legit and it's cool! But being embraced by the cool is like being turned by a vampire: Sure, you get immortality and broody good looks and really great lighting (at least, if you're a CW vampire). But you are different from what you were...and worse, you are under the influence of the vampire that turned you.

Go to a convention. Half of them are now "media" conventions - not only are they not about science fiction, you'll be hard-pressed to find attendees who read books for fun. You'll find costumers (excuse me, cosplayers) who are more interested in showing off their hot bodies than in the costumes themselves - the "sexy kitten Halloween costume" effect. (Not that I have anything against hot bodies, mind you. In fact- okay, let's let that critique slide. I am a visual creature. Sigh.) Their discourse isn't controlled by media corporations, but it's certainly shaped by them. Now corporations set the fan agenda, not the other way around.

2. But marketing can only go so far. Marketing is a craft, not a science. The best campaign in the world can fail without a good product behind it. I have to admit, I'm always going to hope for and expect the best from Joss Whedon. He isn't a demigod, but he's smart and funny and one of the few cinema storytellers out there who seems willing to push hard for something good. Even his failures are usually interesting. That said, the AoS pilot wasn't mind-blowing; I'm hoping that it gets better.

(N.B. Since the Alliance ABC/Disney is a litigious corporate giant, I won't post any images from AoS. You understand.)
Posted by Ted at 9:49 AM No comments: