This is very, very disturbing.
Read the whole article.
Posted by Ted at 4:13 PM 2 comments:

What happens when two Chatbots start chatting?
This.

The Best Writing Software Ever! 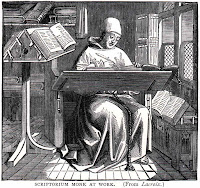 I've been asked a lot...a LOT...which writing software to use. Final Draft? Scrivener? Dramatica?
Obviously, a lot depends on what you're looking for. If you're a screenwriter, film or television, Final Draft is the industry standard. That's mostly because of its automatic formatting and the ease of file sharing: screenplay format is an epic pain in the ass, and it's hard to make it look professional unless you've been doing it for a while...or (of course) you have Final Draft.

Then there's Scrivener, which lets you write your manuscript but

As per usual, we're taking a recipe from that 15th Century cookbook, Le Viandier (the James Prescott translation). It's winter, so let's try a meat pottage.

Crush unpeeled almonds and steep them in beef broth, wine, and verjuice (a sour grape vinegar).

Strain it through a cheesecloth.
Cook breasts of veal and chicken together with some good piece of beef and brown it in lard.
Add fine cinnamon (not a lot), white Mecca ginger, and "Small Spices" like grains of paradise, cloves, and long pepper.
For color, use turnsole or alkanets.
Soak in warm water for three or four hours.
Afterwards put it in your pot, and stir vigorously after the pottage has boiled until it's rose-colored.

Alkanets = a red dye plant
Long pepper = a pepper that's similar to, but hotter than, our standard black pepper
Verjuice = the juice of unripe grapes or other sour fruit, used as we would use some flavored vinegars today

Since this was a pottage - a thick soup or stew - we can assume the meat was prepared with grains and vegetables.

And as always, if you try this...let me know how it turns out!