Why I Love Rick and Morty [NSFW]

It's stuff like this new trailer.
Posted by Ted at 10:52 AM No comments:

Q. Star Wars has burned me before. Like, three times AT LEAST. Is Rogue One really good, or is it just "good for Star Wars"?
A. It's good, period, full stop. It's the best Star Wars movie since The Empire Strikes Back. Certainly better than The Force Awakens.

Q. Okay, neat. So, how many Jedi does it have? Is it true there's a Busby-Berkeley style light saber duel on a rickety bridge over an infinite canyon while flying droids buzz overhead and zap things?
A. Umm, no. That's not 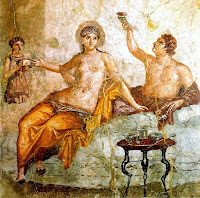 Saturnalia celebrated the Golden Age of Man under the rule of the god Saturn, who taught them the arts of agriculture and ushered in a golden age of peace and prosperity. On Saturnalia gambling was

It's been a while since my last post. The election, writing assignments, and a nasty little back problem all did their bit to make blogging a low priority.

But that's in the past, and here we are. Some exciting news: I've past the midpoint of my newest novel, Conjure Man. A bargain has been struck. Mysterious happenings have raised eyebrows.  A black site has been escaped. A devastating secret has been revealed. And things are going to get even hairier from this point on.