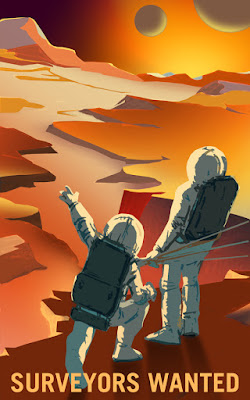 NASA has another series of posters, this time for its Mars missions!
Posted by Ted at 6:40 PM No comments:

Stuck in Realtime With Peter Falk

Historical novels (even one as tongue-in-cheek as The Wrong Sword) rely on telling details to convey a sense of time and place. The best source of these details are primary sources - documents and other items from then and there. For my friends obsessed with mid-20th century America, here is my favorite visual primary source for the 1970s (besides having lived through it): Columbo.

Columbo was a long-running detective TV series in which the wonderful character actor Peter Falk played a disheveled schlemiel of a police lieutenant who put (usually) wealthy and arrogant malefactors behind bars, after passive-aggressively nudzhing them for 45 minutes. It may also be the most 70's-looking show ever.

Notes From the Undergound

Now that New York has the High Line, folks have been proposing a Low Line - an underground park in an abandoned trolley tunnel, with piped-in sunlight and solar energy.


More power to them, say I!

The Physics Is Theoretical, but the Fun Is Real! 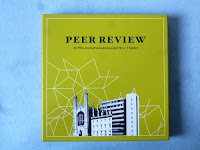 So there is an actual, genuine board game called Peer Review.
I am gobsmacked.
Yay!
Posted by Ted at 6:34 PM No comments:

As I mentioned last week, back in my Hollywood days I wrote a bunch o' spec scripts for TV shows. Somebody suggested recently that it might be fun to post these bits of juvenilia, so I'm doing it. Last week it was Star Trek: Deep Space Nine. this week it's Buffy the Vampire Slayer. See if you can guess which spec-script rule I broke with this one...
Posted by Ted at 7:52 PM No comments:

As some of you all know, I used to write for the TV box. That involved a lot of "spec" scripts for shows that interested me at the time.

One of my more rabid fans (hi, Mom!) asked to see some of the specs I wrote. I figured, why not put them up here? So I will...starting with the one I wrote for Star Trek:Deep Space Nine. It's in the "Pages" section of the blog, right here. Enjoy!
Posted by Ted at 7:31 PM No comments: