Here's What Happens When You Have Story Problems 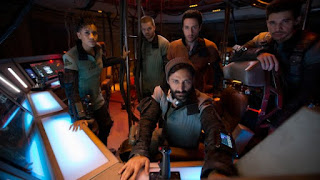 I've written before about The Expanse, and now I've stopped watching. I didn't make it to the season finale.

Story problems kill shows, but they're subtle. If everything else is okay - the visuals, the science, and most especially the performances - then questions of theme and character, tiny fundamental miscues, take a while to sink the show. They're like cracks in the foundation: less then a millimeter wide, but more than enough.

And that's the problem here. Syfy got all the flashbang-geewhiz right (well, except for the Belter physique thing) but they messed with Corey's characters in small but important ways. In the books, these characters are no-nonsense professionals up against something that's utterly beyond their competence. On TV, they're too often pouting juveniles. And somehow the TV writers found ways to suck all the juice out of some of the most serious backstory (such as Amos' childhood) and turn it into flat talking-head exposition. When I heard that an upcoming episode was a flashback to the life of a character who dies in the first episode, I gave up.

I bear the series no ill-will. I'll probably give it another try. It didn't insult my intelligence (unlike some Syfy offerings). And I'm vividly aware that I am not a TV writer, so I don't know if I would do any better. But still, I had such high hopes.
Posted by Ted at 6:24 PM No comments:

Creatures of Light and Darkness - I frequently recommend Roger Zelazny's books Lord of Light and Jack of Shadows. But if you're looking for something trippy and experimental, as well as being a deeply entertaining riff on Egyptian mythology, COLAD is worth more than a look. Zelazny originally wrote it as a narrative experiment. Then Sam Delany saw it, took it to a publisher, and the rest is mythology.


Startide Rising - The best in David Brin's Uplift Wars novels, SR follows the adventures of a dolphin/human starship crew stranded on a deadly world as an interstellar war rages over their heads. Great extrapolation of how technologically advanced cetaceans might act and think; brilliantly realized extraterrestrials; and a believable planetary environment, thanks in part to Brin's background as an astrophysicist. Also a lot of rip-roarin' action.

On Stranger Tides - Pay no attention to Disney's use of the title for the POTC franchise. On Stranger Tides is vintage Tim Powers: a deeply weird, deeply logical, deeply occult and well researched take on pirates, voodoo, and the fountain of youth. It also moves faster than a gunboat under full sail.

Protector - Larry Niven's SF explanation of the nature of old age and human evolution. Overtaken by current discoveries in the human genome and the fossil record, but still a lot of fun, with a great space battle between two STL starships orbiting a dwarf star.
Posted by Ted at 4:59 PM No comments:

You know you've neglected your blogging when-

-your ancient post about mermaids has risen to the top of your eyeball stats once more.

But in the spirit of the Still-New Year and of feeding y'all some red-meat content you can use, here are some book recommendations if you're feeling cold, wet, and dreary this February.

SPQR - A murder mystery set in Ancient Rome in the years before Julius Caesar rises to power. Fast-moving, historically accurate and a lot of fun. 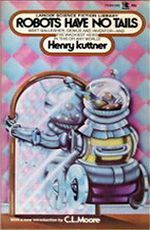 Robots Have No Tails - a collection of old-school shaggy-dog science fiction stories written by Henry Kuttner, one of the forgotten geniuses of the genre. The stories center around Gallagher, an alcoholic engineer who can never remember, sober, the purpose of the inventions he created while drunk. Written in the '40s and '50s, and utterly un-PC in its treatment of addiction. Nevertheless...

Earth Is Room Enough - Seventeen short stories by the master, Isaac Asimov. They all take place on Earth, and only a few of them have robots. Enough hits to make the misses worthwhile.

The Age of Unreason - A series beginning with Newton's Cannon and continuing with A Calculus of Angels, Empire of Unreason, and The Shadows of God. An alternate history in which Newton is more successful as an alchemist than as a physicist. Brilliantly researched, full of fascinatingly flawed historical characters, from Ben Franklin to Peter the Great.

And now, a couple of disses.

I've read two of the most-discussed SF books of the last couple of years: Ancillary Justice and The Three-Body Problem. And I say..."meh." [SPOILERS AHEAD]

Both books are ambitious in ways that my above recommends are not. And both have some really interesting ideas. Ancillary's treatment of the question of individuality and the group mind is handled in a way that was both original and chilled my spine a bit. TBP's use of China's Cultural Revolution, the seven untouched dimensions of particle physics, and what it might take for someone to sell out the whole human race were all new...and if you can't have new in SF, where can you have it?

But there were long stretches in both books that made my eyes glaze over a little bit. In TBP it was the narrative time spent inside a VR game that's a recruiting device for the aliens. (Not only is any literary "holodeck" experience mostly meaningless, in these sequences the protagonist completely passive - it's not clear how he "wins" to the next level.) In Ancillary it's the time that...frankly, I can't even remember. (I read Ancillary Justice a year and a half ago, and it didn't stick.)