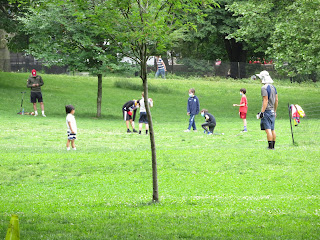 Research for "Hero's Army," the Sequel to "The Wrong Sword" 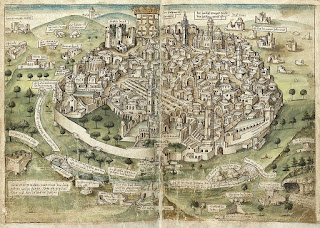 Right now, I'm at a scene in which my protagonist, Henry the Rat, is about to enter the city that everyone covets but him - Jerusalem.

This is Jerusalem at a very specific time in history. It's 1191, the tail end of the Third Crusade, in which Saladin, sultan of Syria and Egypt, faced against Richard I, King of England. Saladin had wrested Jerusalem from Crusader control four years before and captured, exiled, or ransomed the entire Latin-speaking Christian population [as opposed to Greek Christians - Byzantines and others - who were allowed to remain]. It should be noted that when he allowed the Crusaders/Franks/Latins to surrender, Saladin was being considerably more merciful than the Crusaders had been 88 years before, when they had massacred Moslems and Jews until the "streets were knee-high in blood."

The big problem for a writer is that the histories of the time - at least, those available in English - are good when it comes to politics, armies, and trade, but less so when it comes to descriptions of daily life. You want to be able to describe the sights, the smells, the sounds. What people are wearing, how they're talking, what they're eating. How the streets are built, how the houses are constructed and why.

Basic histories tell you none of this. So you go looking for telling details - bits you can use to suggest a bigger picture - in primary sources: documents and artifacts created at the time.

Which is to say I found two tonight. YAY!

1. The Travels of Benjamin of Tudela - tbh, I already knew about this, but I'd forgotten it. Benjamin was an Andalusian Jew who kept a journal of his travels across the Mediterranean and in the Levant. Full of little tidbits, like the story of two workmen who accidentally uncover the tomb of King David, which reads like the Tale of Aladdin.

2. The Metropolitan Museum of Art's exhibition "Jerusalem 1000 to 1400: Every People Under Heaven." Because, you know, ARTIFACTS.