I'm a Scrubs fan. I saw the first few episodes, didn't get the conjunction of gore and sitcom, but then I rapidly got hooked...by the actors (especially John C. Mcginley as Cox) and even more by the writers. The writing was just loopy. I loved it. So when I see Zach Braff, star of the show, doing something, it is admittedly through a pair of Scrubs-colored glasses.

However, things changed when I found out that Zach was financing his second movie via Kickstarter.

Kickstarter is great. It allows thousands of struggling artists to disintermediate their work, step around the gatekeepers - the agents, producers, label owners, gallery owners, curators, editors - and take things directly to an audience. (And the same for inventors, designers, performers, etc.)

But here's the thing: Zach Braff isn't a struggling artist. He was the star of a hit sitcom for nine years, a sitcom that's still in syndication. He's a multimillionaire. And even more important than that, in Hollywood terms, is that he's legit. He's one of the handful of actors and filmmakers who actually make a living in this industry and can get financing. So if he can get financing from the usual sources, why's he going to Kickstarter?

Other folks have made that point - here and here, for instance. But what cemented my opinion was going to the website, and seeing what people got for the donations. They got swag.

In the entertainment industry, swag has some very specialized meanings. There are at least two tiers of swag:

1. Celebrity swag. This is the stuff that stars and heavy hitters get from companies looking for publicity. It's pricey - trips to Hawaii, $400 Tom Ford sunglasses, $200 digicams, $500 days at exclusive (or wannabe exclusive) spas, and so on. It goes into the gift bags at Oscar night, and populates the skyboxes of top producers at Universal.

To put this in perspective, my closet holds something that's the pinnacle of tourist swag, something that's pricey enough to occupy the no-man's land between the two tiers - in other words, something that has value outside of its connection to Hollywood. It's a leather bomber jacket with the MGM logo (but it would look better without it). My dad got it for free from an MGM exec when their companies were doing business. Then he gave it to me. (Thanks, Dad!)

Guess which tier Zach's offering? That's right. Not even bomber jackets for his funders.

Even worse - and this really did get my goat - is that serious fans get the "opportunity" to be an extra in his movie. And it will only cost $2,500...instead of Braff paying the fan the $80 a day plus meal that an extra is entitled to.

Let's turn this around a little more. Most filmmakers on Kickstarter can't find any other funders for their projects because legit financiers can't see any profit potential. But Braff's film, budgeted at $2 million, is actually a damned good bet for profit. His last film, Garden State, got theatrical release and showed up on premium cable channels. Its budget was $2.5 million. It was purchased by Miramax for $5 million. And it went on to earn more than $35 million worldwide. Does anyone doubt that another low-budget indie-esque film by Braff will make a profit? (The film will, at the very least, be professionally done. That, plus Braff's name recognition, pretty much guarantees TV sales.)

If Braff takes money from traditional investors, he will have to pay them from profits. If he uses his own money, the risk is all his (maybe the production gets shut down, there's an earthquake, Café Hugo discontinues its business brunches, something). But if he gets it from Kickstarter, he keeps all the profit, and the fans take the loss. Nice work, if you can get it.

Now, a laissez-faire capitalist might say that this is a contract freely entered into by Braff and the fans. True, but there is what an economist would call "information asymmetry" - since the fans probably haven't worked in the industry, they don't have the context to appreciate just how little Braff is offering them, and how much he stands to gain.

To be fair, Braff may believe his stated purpose for using Kickstarter - that he doesn't want to make the compromises in his film that traditional financiers might demand. And maybe the real motivator for the Kickstarter funders is that they truly want to be part of the filmmaking experience. If that's the case, let Braff make this promise to his Kickstarter funders: That if the movie makes any profit, they will be the first to receive a return - even if it's only a repayment of their money. Then the funders will really be part of the action...they'll be producers. 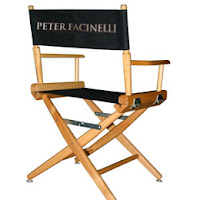 PS - You remember I mentioned director's chairs as tourist swag? Well, it turns out that for $75 they're offering Kickstarter funders the chair back with the movie's name and logo. Not the entire chair, mind you. Just the canvas back.
Posted by Ted at 4:01 PM