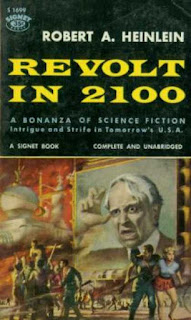 As I said here, there are some scenes and passages that just hit that perfect note. Maybe it's awe. Maybe it's fear. Maybe it's just pure frikkin' cool. However they succeed, it makes sense for us writers to dissect them and see what makes them tick, no?

So...Robert Heinlein. One of the big names in science fiction. In recent years, he's been associated with militarism, libertarianism, and polyamory. But anyone who's read more than Stranger in a Strange Land and The Moon Is a Harsh Mistress knows that for most of his career, his biggest ideology was anti-ideology. He was always a patriot who cherished the military values of honor and courage; but he was also a writer who kept asking questions that were political and philosophical as well as scientific. He believed in self reliance, but was also usually big enough to avoid the "I've got mine" selfishness of Objectivism.


Which brings us to my favorite passage. This is from Heinlein's novella Revolt in 2100 (also known as If This Goes On-) another of his spine-chillingly prescient works. Written in 1940, it describes a future in which Nehemiah Scudder, a backwoods preacher,
learned to manipulate modern electronic media and rose to power, instituting a theocracy in the United States. Decades after the "First Prophet" has died, the protagonist, John Lyle, is involved in a conspiracy to overthrow the evangelical religious dictatorship that Scudder left behind. This scene is a personal fave because it includes one of the best definitions of religious freedom that I've ever encountered. Ready? Here we go:

Zeb lay back, smoking, and let me stew. I knew that he smoked and he knew that I disapproved. But it was a minor sin and, when we were rooming together in the Palace barracks, I would never have thought of reporting him. I even knew which room servant was his bootlegger. "Who is sneaking your smokes in now?" I asked, wishing to change the subject.

"Eh? Why, you buy them at the P.X., of course." He held the dirty thing out and looked at it. "These Mexican cigarettes are stronger than I like. I suspect that they use real tobacco in them, instead of the bridge sweepings I'm used to. Want one?"

He grinned wryly. "Go ahead, give me your usual lecture. It'll make you feel better."

"Now look here, Zeb, I wasn't criticizing. I suppose it's just one of the many things I've been wrong about."

"Oh, no. It's a dirty, filthy habit that ruins my wind and stains my teeth and may eventually kill me off with lung cancer." He took a deep inhalation, let the smoke trickle out of the corners of his mouth, and looked profoundly contented. "But it just happens that I like dirty, filthy habits."

He took another puff. "But it's not a sin and my punishment for it is here and now, in the way my mouth tastes each morning. The Great Architect doesn't give a shout in Sheol about it. Catch on, old son? He isn't even watching."

"There is no need to be sacrilegious."

"You weren't, eh? You were scoffing at one of the most fundamental - perhaps the one fundamental - proposition in religion: the certainty that God is watching!"

For a moment all I could do was to sputter. "Why, it isn't necessary. It's an axiomatic certainty. It's -"

"I repeat, who told you? See here, I retract what I said. Perhaps the Almighty is watching me smoke. Perhaps it is a mortal sin and I will burn for it for eons. Perhaps. But who told you? Johnnie, you've reached the point where you are willing to kick the Prophet out and hang him to a tall, tall tree. Yet you are willing to assert your own religious convictions and to use them as a touchstone to judge my conduct. So I repeat: Who told you? What hill were you standing on when the lightning came down from Heaven and illuminated you? Which archangel carried the message?"

I did not answer at once. I could not. When I did it was with a feeling of shock and cold loneliness. "Zeb... I think I understand you at last. You are an- atheist. Aren't you?"

Zeb looked at me bleakly. "Don't call me an atheist," he said slowly, "unless you are really looking for trouble."

"Then you aren't one?" I felt a wave of relief, although I still didn't understand him.

"No, I am not. Not that it is any of your business. My religious faith is a private matter between me and my God. What my inner beliefs are you will have to judge by my actions... for you are not invited to question me about them. I decline to explain them nor to justify them to you. Nor to anyone... not the Lodge Master... nor the Grand Inquisitor, if it comes to that."

"But you do believe in God?"

"I told you so, didn't I? Not that you had any business asking me."

"Then you must believe in other things?"

"Of course I do! I believe that a man has an obligation to be merciful to the weak…patient with the stupid... generous with the poor. I think he is obliged to lay down his life for his brothers, should it be required of him. But I don't propose to prove any of those things; they are beyond proof. And I don't demand that you believe as I do."

Instead of looking pleased he answered, "That's mighty kind of you, brother, mighty kind! Sorry-I shouldn't be sarcastic. But I had no intention of asking for your approval. You goaded me - accidentally, I'm sure - into discussing matters that I never intend to discuss." He stopped to light up another of those stinking cigarettes and went on more quietly. "John, I suppose that I am, in my own cantankerous way, a very narrow man myself. I believe very strongly in freedom of religion - but I think that that freedom is best expressed as freedom to keep quiet. From my point of view, a great deal of openly expressed piety is insufferable conceit."

"Not every case – I've known the good and the humble and the devout. But how about the man who claims to know what the Great Architect is thinking? The man who claims to be privy to His Inner Plans? It strikes me as sacrilegious conceit of the worst sort - this character probably has never been any closer to His Trestle Board than you or I. But it makes him feel good to claim to be on chummy terms with the Almighty, it builds his ego, and lets him lay down the law to you and me. Pfui! Along comes a knothead with a loud voice, an I.Q. around 90, hair in his ears, dirty underwear, and a lot of ambition. He's too lazy to be a farmer, too stupid to be an engineer, too unreliable to be a banker- but, brother, can he pray! After a while he has gathered around him other knotheads who don't have his vivid imagination and self-assurance but like the idea of having a direct line to Omnipotence. Then this character is no longer Nehemiah Scudder, but the First Prophet."

There's more, of course. And admittedly, one of the reasons I like this passage is that - as a Jew - I've been the target of missionaries myself, and I consider the imposition of one's religious viewpoint on others (especially when it's called "sharing our beliefs"!) to be the height of bad manners. That said, let's take a look at what's going on.

First of all, don't let the seemingly simple language fool you. Heinlein is working on at least three different levels. Architecturally, he had a chunk of philosophy he wanted to get out there - so he embedded it in a conflict between his protagonist, John Lyle, and John's biggest source of spiritual support, Zeb. The emotional stakes are therefore automatically high. Embedding non-plot exposition in a conflict or argument is one of the oldest tricks in the book - because it's so darned effective.

Next, check out the language. Look at that specificity! Every point Zeb makes has some concrete image attached to it; but every proposition of John Lyle's is vague and abstract. John Lyle uses words like "axiomatic certainty," "sacrilegious," and "atheist." He's talking about ideas. Zeb, on the other hand, talks about people: the Grand Inquisitor; the First Prophet; the obligations he feels toward his fellow man. And while John gears up for a philosophical debate, Zeb specifically forswears any argument: "I don't propose to prove any of those things. They are beyond proof." Heinlein the author has loaded the dice and stacked the deck. How could you not agree with Zeb?

Then there's the rhythm. Zeb speaks more than John - having been "goaded" into it - and that gives Heinlein the opportunity to work patterns and rhythms into what he's saying - especially rhythmic parallelisms: "He's too lazy to be a farmer, too stupid to be an engineer, too unreliable to be a banker..." "I believe that a man has an obligation to be merciful to the weak...patient with the stupid...generous with the poor..." The phrase that then breaks the pattern has added impact.

It's also a treat in a work of science fiction to find old Americanisms on the cusp of quaintness: "Cantankerous," "knothead,""character." With the exception of a few works like The Moon Is a Harsh Mistress, Heinlein usually doesn't try to make his characters' dialogue sound futuristic. (When it does, it's often because the characters are specifically referring to items that Heinlein has created for them.) This makes his stories more, not less believable. In this instance, it's a brilliant way to "ground" the discussion - talking about the biggest and most important of intellectual concepts in a deliberately down-home, but accurate, way.

(As a side note, did you notice the inclusiveness of the religious references? Zeb doesn't just talk about "standing on a hill" - a clear reference to Mt. Sinai and the Beatitudes; he also mentions an "archangel carrying the message," which is how Mohammed receives the Koran from Gabriel, and "the Great Architect" and the "Trestle Table," which are Masonic metaphors.)

It's also telling that the entire discussion, which deals with the central ideas of the book and threatens the friendship of the two main characters, is started by something as trivial (certainly to 1940s readers) as smoking a cigarette. It also shows how familiar Heinlein was with the tenets of Baptist and Evangelical congregations of the time, which frowned on smoking, along with drinking, dancing, and so on.

But in the end, what really holds the passage together is contempt - Heinlein's righteous contempt for all the Jimmy Swaggarts, Ralph Reeds, and James Dobsons of the world. And wouldn't that be enough, all by itself?